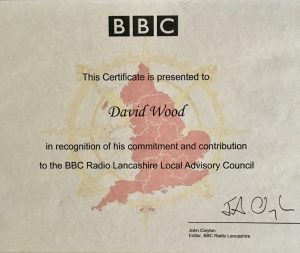 Between 2005 and 2007, David Wood was one of the twelve BBC Local Advisory Council (LAC) members in his area. The role was to represent the listeners and viewers of Lancashire and offer advice and feedback on BBC programmes and services.

David says “It was an exciting time within the BBC, particularly in the North of England, as there were big changes ahead with the BBC’s accountability under the new Royal Charter which started in January 2007; and the move of staff to MediaCity”.

At the time, every BBC Local Radio station had its own Local Advisory Council (LAC) members but there were changes to the BBC’s accountability under the new Royal Charter that started in January 2007. The councils and the English National Forum disappeared and were replaced by larger Regional Audience Councils reporting to the Audience Council England. These councils had a wider remit as advised the new BBC Trust (which replaced the Board of Governors) on all national, regional and local services and on BBC policy.