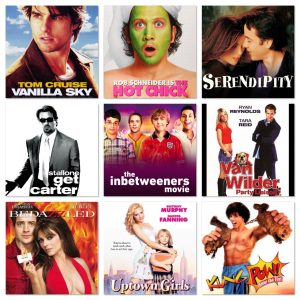 As the Co-founder and Co-CEO of the British based independent record label Faith & Hope Records Limited; David had music on major films including Hollywood films.

Vanilla Sky
Faith & Hope’s track ‘From Rusholme with Love’ is in this 2001 Cameron Crowe directed American science fiction psychological thriller film starring Tom Cruise, Penélope Cruz, Cameron Diaz, Jason Lee, and Kurt Russell. Watch this video from 3.00 to see the scene with our music at Vanilla Sky Scene. The soundtrack has been critically acclaimed and called “a music masterpiece” by The New York Times. Watch the Vanilla Sky Trailer.

Serendipity
Faith & Hope’s track ‘From Rusholme with Love’ is in the 2001 Peter Chelsom directed romantic comedy film ‘Serendipity’ starring John Cusack and Kate Beckinsale. Watch a video with our music in – and Mint Royale make a cameo appearance on stage in the film – at Serendipity Scene. Our track also made it on to the Serendipity Soundtrack album which was released by Sony Music Entertainment Inc. Watch the Serendipity Trailer.

Get Carter
Faith & Hope’s tracks ‘Diagonal Girl’ and ‘From Rusholme with Love’ are in the 2000 Stephen Kay directed remake of the action thriller film ‘Get Carter’ starring Sylvester Stallone, Miranda Richardson, Rachael Leigh Cook, Michael Caine, and Mickey Rourke. Watch the scene with one of our pieces of music is in at Get Carter Scene. Watch the Get Carter (2000 remake) Trailer.

Baby Driver
Faith & Hope’s Edgar Wright directed ‘Blue Song’ Video is shown on the TV at Baby’s house in Edgar’s 2017 film Baby Driver. It is now accepted that our video is the origins of Baby Driver after he told NME, “That is a clip from the music video for ‘Blue Song’ by Mint Royale that I directed after Spaced and before Shaun Of The Dead, which was basically a dry run for this movie,” he continued, “It’s somewhat similar to the opening scene of Baby Driver. I thought it’d be fun to include a tiny clip of it on a TV.” [at Baby’s house in the film]. Take a look at Video of ‘Blue Song’ & ‘Baby Driver’ side by side.

Not Today
Faith & Hope’s track ‘The Effect On Me’ is featured in the Jon Van Dyke directed 2013 gripping and powerful film ‘Not Today’ starring Cody Longo and John Schneider (Dukes of Hazzards fame) and is in the trailer for the film. Watch the Not Today Trailer.

A Time For Dancing
Faith & Hope’s track ‘Show Me’ is featured in the 2002 Peter Gilbert directed drama film ‘A Time for Dancing’ starring Larisa Oleynik, Shiri Appleby, and Peter Coyote. Watch the A Time For Dancing Trailer.

Boy A
Faith & Hope had soundtracks credits on ‘Boy A’. Our tracks ‘Floor Basics’, ‘Princess’, and ‘Sexiest Man In Jamaica’ are all in this powerful multi-award-winning John Crowley directed 2007 British film that won 13 Awards Internationally (including 4 BAFTA’s). The Production companies were Film4 Productions and Cuba Pictures; and it starred Andrew Garfield, Peter Mullan and Shaun Evans. ‘Boy A’ is a film adaptation of Jonathan Trigell’s critically acclaimed novel of the same name. Watch the Boy A Trailer.