The Faith & Hope website can be found at faithandhope.co.uk

The Short Story
David Wood established Faith & Hope Records in 1997 with his co-founder Neil Claxton. They never imagined that one day they would have a string of chart hits and key tracks –  music on major hollywood films – music on tv programmes globally – music on the adverts of world leading brands – tracks featuring world-class artistes….. let alone, written about in a national newspaper feature. 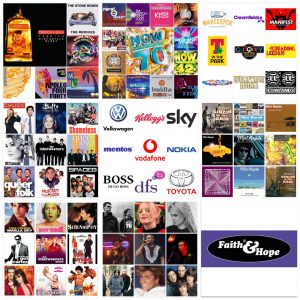 The Long Story
David Wood and Neil Claxton go back to the mid-late 1980’s. Neil was one of David’s students when he taught in private practice and they have had a close friendship (Neil is the godfather of David’s daughter Jess), and a strong working relationship ever since.

In the Autumn of 1997, they decided to set up Faith & Hope and opened for business on the 11th of November 1997 with a desk above Promenade Music, and an office (a tiny room) on the third floor of the old Sankey’s soap building in Manchester.

In early 1998, they made their first signing; and released our first 12″ only release in November 1998. Realising the label needed a kick start – and something big to talk about at the forthcoming January 1999 Midem music industry event in Cannes – they arranged for Neil [aka Mint Royale] to do a remix of Terrorvision’s ‘Tequila’ which entered the UK charts at #2 around Midem and the label immediately had profile. Mint Royale remained the ‘backbone’ of the label giving them a string of hits.

2000 saw major expansion within Faith & Hope with the creation of ‘Faith & Hope Songs’, a publishing arm of the company; and in 2002, David and Neil were delighted to welcome Doug D’Arcy in to the company as an equity shareholder. As well as a shareholder, Doug’s been a mentor which has been invaluable for them.

In 2008, David, Neil, and Doug established Faith & Hope’s music synchronisation arm ‘Areebo’ to supply the music they represent to music supervisors and professionals from the worlds of film, television, advertising and games. They have had great success supplying and licensing music since they started.

For many years, Faith & Hope formed a pivotal part of the Manchester music scene. With an ethos of honesty and realism, Faith & Hope’s acts varied massively in style but all fell under the banner of ‘alternative pop’.

The acts hovered anywhere between electronica and rock, between the individual and band-driven. Determined to release inspirational music without spending a fortune doing it, they were one of the first labels to champion the lo-fi creativity of the burgeoning ‘bedroom musician’ ethic as their starting point.

They are one of the few UK independents to have entered major licensing / joint ventures with most major music companies – including Universal, EMI, BMG, and Sony – which is a tribute to visionary A&R, and business skills.

Today, they work the back catalogue.