David Wood’s Memories and the History of Morecambe Music Festival 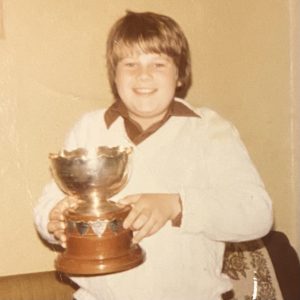 At the age of eighteen, I joined the Morecambe Musical Festival committee and was a member from 1984 to 1989. My love of the festival began when I entered the festival as a child competitor. I can’t remember the exact year, but the photo of me on this page was taken after I won a rose bowl cup in a boy soprano class when I was around thirteen or fourteen years old.

Originally established in 1893 as the Morecambe Music Competition, the Morecambe Music Festival was widely considered as the finest and certainly one of the largest music festivals in the country at the turn of the 20th century. The festival has a fascinating history and ran until 2004.

The Morecambe Music Festival founders – Canon Gorton and Robert Howson – grew the festival from a two-day event to the point by the early 1900’s where it ran for a whole week with 4,000 competitors. Various classes for solo singers, instrumentalists, ensembles, and choirs all competed; and contestants travelled from far and wide resulting in the festival becoming an important diary date in the musical calendar for the whole country, not just the North of England.

Edward Elgar had an involvement with the Morecambe Music Festival. It began in June 1902, when he was commissioned to write a new test piece for the following years festival. Charles Howes (who owned a piano shop in Morecambe) and Arthur Johnstone (the music critic of The Manchester Guardian) were leading advocates of Elgar on the Morecambe executive committee and Elgar’s work ‘Weary Wind of the West’ – dedicated to Morecambe – was set to four verses by the Manx poet Thomas Brown. It received its debut performance in the May of 1903 at the festival and Elgar attended a further three festivals in 1904, 1906 and 1907.

In a letter to ‘The Musical Times’ in 1903, Elgar wrote “the living centre of music in Great Britain is not in London but somewhere further north”. You can read more about all this in the Geoffrey Hodgkins book ‘Somewhere Further North: Elgar and the Morecambe Festival’.

After a break for the first world war, throughout the 1920’s and 1930’s, the festival continued to grow under the stewardship of Charles Howes and the committee. Morecambe Music Festival was one of the founding festivals the National Federation of Festivals in 1921.

By 1923 – when a twelve-year-old Thora Hird entered the festival – there were circa 5,000 competitors. The disciplines of elocution, speech and drama were added in 1928; and the Halle Orchestra and 2,500 choir were conducted by Malcolm Sargent at the 1936 festival.

During his year as the Mayor of Morecambe, Charles Howes wanted the festival to continue to be one of the key dates in the music calendar, and through his friendships with Sir Henry Wood and Sir Hamilton Harty, the two graced the festival in 1938.

After a break for the second world war, the festival continued in the 1950’s under the stewardship of Charles Howes, Norman Mayor, and Sam B Wood who would later become one of my private music teachers.

Following the 1977 closure of Morecambe’s Winter Gardens, the committee needed to change venues, and the festival classes for the next few years were held at the likes of the Green Street Methodist Church, The Central Pier, The Elms Hotel, Christ Church, et al.

These smaller venues unfortunately didn’t attract the large choir classes of previous decades. Fortunately, the weakening in the choir sections were made up by the growth in the instrumental sections; but by the early 2000’s, the competitor numbers had dwindled, the committee were struggling to man all the venues with volunteers, and the final Morecambe Music Festival was held in 2004.