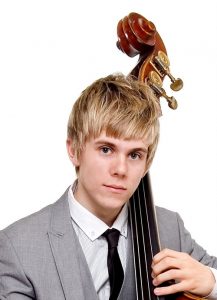 David Wood’s son Harrison Wood is a professional bassist, band leader, and businessman. Born in 1991, Harrison started playing bass as a child, and professionally as a teenager.

He studied at Manchester’s Royal Northern College of Music from 2006-2011. He stated at Junior RNCM, where he was awarded the 2009 Director’s Prize; the 2007 and 2009 Yorke Trust Prize for Double Bass; became the principal double bass with the Halle Youth Orchestra; and bassist with the National Youth Jazz Orchestra. After accepting a scholarship to study at the main RNCM when he was 18, he then studied as an undergrad, played in college ensembles and was chosen to play in the Conservatoires UK All Star Big Band.

Away from playing bass, he is a fixer, musical director for Creation Worldwide; founder of the entertainment business Hville Music; and founding-member of the function band The Groove Membership. Away from music, he spends time with his wife, and son [my grandson] Freddie.

Away from music, Harrison competes in both Ironman 70.3 mile and the grueling 140.6 mile long-distance triathlon competitions. [The 140.6 ‘full-distance’ is where he swims for 2.4 miles, cycles for 112 miles, and then runs a marathon of 26.22 miles]. Harrison won his age group [age 30-34] and finished 4th overall – out of over 2,400 athletes – in the pinnacle 140.6 mile full-distance event at Ironman Ireland in Cork in August 2022 with a time of 9 hours 34 minutes and 54 seconds; and competed in the 70.3 distance in Utah [USA] at the Ironman World Championships in October 2022. As a youngster, Harrison was an excellent young golfer and footballer; and now helps coach his son Freddie’s Greenloons Formby FC youth football team.