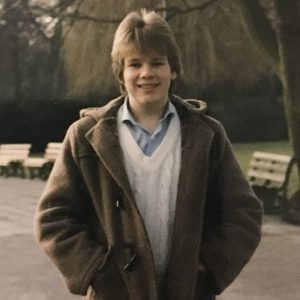 The Short Story
David Wood became self-employed at 18 and his early professional life in the music industry was diverse.

He worked as a live, theatre, and studio musician (as an instrumentalist, musical director, and jingle creator); worked as an arranger, proof-reader, and copyist for publishers; and taught music in private practice.

The Long Story
David Wood became self-employed at 18, and his early professional life in the music industry was doing a diverse range of things. He worked as a live, studio, theatre musician as a player and musical director; worked as an arranger, proof-reader and copyist for independent music publishers; and as a private music teacher, and is proud thatheI never had a pupil fail a grade or diploma examination.

Whilst studying at Manchester’s SSR in 1985, he got a ‘part-time’ job in a studio preparing sessions, tape-operating, and editing. In 1986, he worked as a jingle writer, creating adverts through my newly created ‘St Aubyns Sound Recordings’ that was eventually swallowed up by Trans World Communications.

A mentor told him that if he was to survive in the music and entertainment industries, he needed to understand every aspect including recording, manufacturing, marketing, distribution, licencing and all the legal and royalty collection aspects, so he continued to study whilst working.

Although he says “I did some horrendously mundane gigs in my career – which I needed to do, to earn a living, and put food on the table – I also did some fantastic gigs too”. By the time he finished playing professionally, he had clocked up somewhere in the region of 4,000 gigs as a live, studio and theatre musician; run his own function band and played some of the most extravagant private parties and corporate events both here in the UK and abroad.

He worked with some of the UK’s most talented musicians, singers, and entertainers; and he has repect for my friends who are still constantly gigging. He says “It’s a great life when you’re single, but tough when you have a family”.